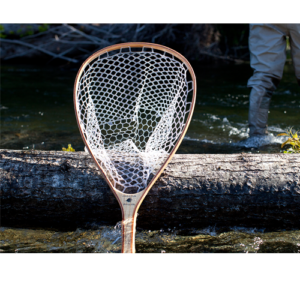 My name is Kit Carlson and my wife, Kristine and I own Creative Angler. I have had a passion for the outdoors my entire life. As a kid I enjoyed fishing, mainly spin cast. I learned from my Dad, at an early age, on how to tie your line, bait your hook and row a boat. My Dad taught me the basics of fishing but put a heavy emphasis on “if you catch it you eat it”. Putting food on the table and providing for your family is what he would say; Why else would you fish????? At first I thought this was great. The lake I grew up on was filled with crappie, perch, trout and bass. I would come home with a bucket full of fish, trying to make my Dad proud.

I am not exactly sure when my mentality changed, some time in my teens but I had caught a really nice large mouth bass. I was using a perch colored Floating Rapala #7. I remember casting it in towards the shore and landing it between a couple lily pads that looked like it should be holding a bass. I let that Rapala sit in the water until the rings around it disappeared and would give it a couple twitches, reel in the slack line a little bit and then let it sit. That’s when I watched the bass hit that Rapala and the battle was on.

From watching that entire process of getting a great cast, a nice presentation of the Rapala, and watching the bass attack triggered something in me that made the catch of the fish the most exciting part of fishing. I wanted that again, the adrenaline rush I had just experienced was the greatest thing. Thoughts were going through my head, do I put this big bass in the bucket so my family could eat it, or do I let it go? That day for the first time I released the bass as my urge to catch it again was greater than putting food on the table. When I came home from fishing that day my Dad noticed an empty bucket, “Wasn’t able to put anything in the bucket today Dad but I will give it a try again tomorrow”.

It was soon after that experience when I picked up a fly rod and taught myself to fly fish.

Tossing big bass bugs like I did with Rapalas or putting on some smaller poppers and catching panfish. There is something about fly fishing that I never get tired of doing. Dry fly fishing is my favorite as I enjoy watching the fish take the fly. Being able to cast a fly to a fish and present it accurately while dealing with bushes and trees on the shore, the different drifts of the water and keeping your fly in the correct line for the fish can be very difficult and will not always provide a fish on the end of your line. But when it does produce and you get to watch it all happen in front of you is an amazing thing.

Don’t get me wrong I have nothing against someone catching and keeping their fish to eat, I would rather catch it again.

Enough typing I need to fish!